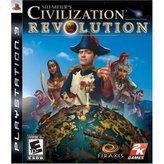 A million years ago when I attended a VERY alternative High School called SEED. we used to spend several hours playing a board game called Civilization.
I loved it. You got to develop your country . trade good and build of stores of gold and wheat, etc. and create allies.

Over the year i sort of saw it get turned int a PC game back in the 90’s. Now that my kids are a bit older and I have FREE time I have been looking outside my comfort zone. Last week while perusing though PlayStation 3 games for me son, I saw on the shelf at Blockbuster a copy Sid Meier’s Civilization Revolution. Could it be the same game I played as a teenager? It was.
I brought it home.. and promptly forgot about it.
10 days later the case was still unopened and unreturned. My daughter (11)asked me if I was ever go to play it… I sighed and said “Guess not.” She asked if she could try.
I was surprised because she doesn’t have that much interest in video games unless it involves her and a microphone OR elaborate dance moves ( Rock Band, Dance Dance Revolution, Sing Star).
The geek in me seized the moment! I grabbed a cup of tea and watched her set up the game, She played for 6 hours. Same thing the next day, and the next. I ended up returning the rental of Sid Meier’s Civilization Revolution for PS# and trading in3 other games for a new copy at local video game store so we could own the copy. Shockingly, my 5 year old son is quite happy to watch her play- or be in control of the remote while she makes the strategy decision and order him around…

The game is available on three platforms- for PlayStation 3, X-Box360 and a version of version of Civilization Revolution for Nintendo DS

The DS one is pretty good- not as intricate as the ones for Xbox and PS3 but a great play value.

When I look at a video game I don’t; think about how much learning they will get out of it- I they play it long enough they’ll learn something. Games that challenge, are fun and keep you on your toes are the best ones and coincidentally will usually be chocked full of “learning” .
I look for games that my kids will actually play. I am happy to invest money in a game the play and enjoy. A game that is crappy, not well designed will not get played, does not have good play value and will offer little in the way of conventional learning.

Sid Meier’s Civilization Revolution rates very high o all accounts and is a safe bet- even for girls!

Screenshots of the game here